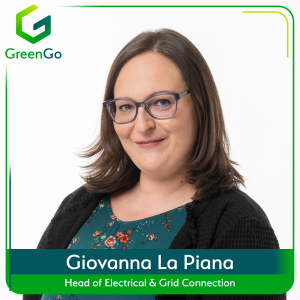 The GreenGo Srl management team is excited to announce a new resource: Ms. Giovanna La Piana has recently joined as Head of HV Electrical & Grid Connection of the Engineering department.
She is an electrical Engineering proudly from Sicily starting her career as solar power plant designer in 2009. Meanwhile she was gradually moving her first steps in the industry up to 2012 through a wide range of PV projects in Sicily. From 2013, her track record was focusing on utility scale high voltage generation plant such as wind and photovoltaic along with the development, executive design and construction in PLT energia Srl Engineering first and Tozzi Green S.P.A. later accounting for over 300 MW delivered projects.
She states: “I am thrilled to contribute with Greengo multi-tech platform. Despite the critical burocratic issues that are slowing down permitting processes, GreenGo’s integrated approach i as well as the full control of greenfield project value chain up to the COD status. I believe that this modus operandi will be successful in order to significantly contribute to the Italian Ecologic Transition”.